One of the central problems that I try to address in my research is that of deciphering the record of climate stored in the Martian Polar Ice Caps. The majority of water ice on Mars is located in vast ice caps at its poles, which are similar to Earth's ice sheets in Greenland and Antarctica, but as Mars is a much smaller planet, have a combined volume about the same as that of the Greenland ice sheet. Like on Earth, the composition of this ice and the manner in which it is deposited depends on the climate at the time.
A primary driver of planetary climate evolution is the change in the planet's orbital configuration, e.g. oscillations in the tilt of the planet's rotational axis that affect the distribution of sunlight on the surface, and therefore drive climate. On a planet as complex as Earth, many more things contribute to climate change, including the presence of life. On Mars however, the effects of this so-called "orbital forcing" of climate can be much more readily observed, and this is particularly true in the geologically young polar ice sheets.

How obliquity affects polar ice: When a planet's obliquity (tilt of rotation axis) is high, the average sunlight is higher on the poles, so ice migrates to lower latitudes. When it is low, the opposite happens, and ice is more stable at the poles. On the left is Mars' current axial configuration.
The bulk of the material in the Martian ice sheets is arranged in the so-called Polar Layered Deposits (PLD), named after the stratified configuration that can be observed from orbital instruments, thanks to the massive canyons and troughs that dissect them and exposed their internal structure. The layers in the PLD contain varying amounts of dust, likely related to the state of the climate when they were accumulated. 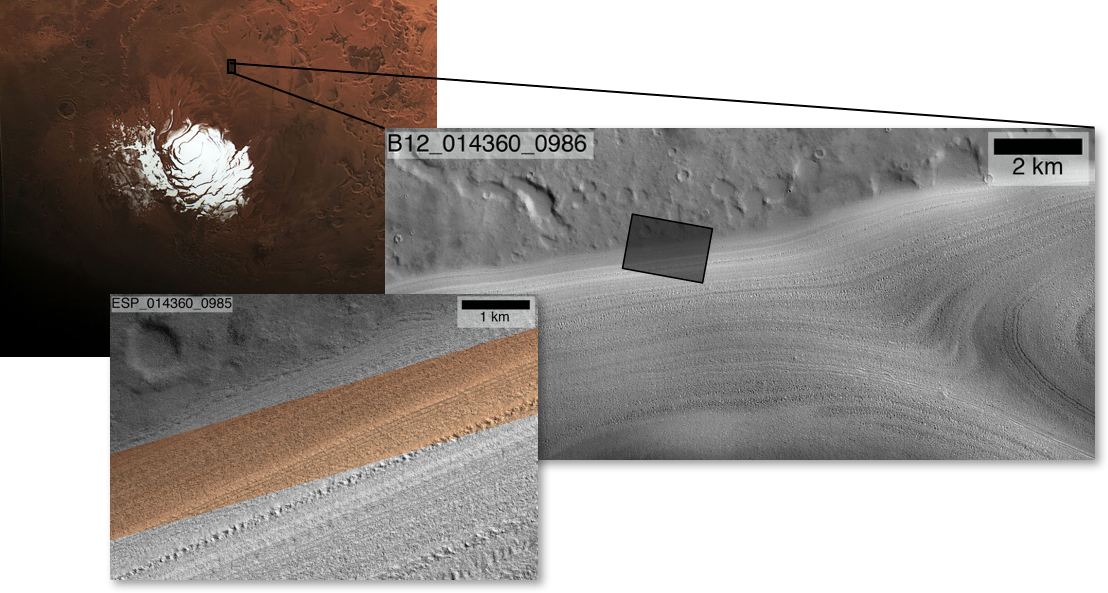 Mars' PLD (South PLD here seen by MARCI in the back image) are dissected by troughs that expose their internal layered structure (seen by CTX and HiRISE in the two front images).
In my work, I try to understand the connection between the PLD and the orbital oscillations of Mars. The images of the exposed PLD layers allow us to construct "virtual ice cores", which comprise a record of the planet's climate evolution. Through a combining analysis of these virtual ice cores with models of the PLD accumulation, I was able to find a connection between the stratigraphy in the North PLD and the periodic changes of Mars' orbital and rotational parameters, providing an estimate of age and climate-driven accumulation history. In the South PLD, I used similar techniques to detect signals of orbital forcing analogous to those in the North, and came up with a timescale of accumulation for the South PLD. This led to the discovery of a climatic connection between both of Mars' polar ice sheets: although very different in age, their accumulation is likely to have been forced by the same climatic cycles.  ​Understanding the connection between orbital evolution, climate, and the resulting geology is key to attaining a complete picture of Mars' recent history, which can teach us not only about climatic evolution on Mars, but also about the primary principles of planetary climate change in general. ​
Currently, through a collaboration with colleagues here in Bern, as well as NASA and the Planetary Science Institute, I am working on correlating the images and topography of the exposed NPLD layers to the data from ice-penetrating radar, which can detect buried ice layers by the different amount of dust entrained in each layer or layer packet. This work, combined with an investigation of the electrical properties of Martian simulants in the lab, will allow the construction of a true, compositional stratigraphic column for the PLD, which can be used to constrain models of accumulation of the ice, and unlock the climate record hidden in the polar layers.

This is a subsurface radar image of the North PLD, taken by SHARAD. The lines across the image correspond to changes in the electrical properties of the material within the PLD, such as for example the change from a layer of pure ice to one of dustier ice. It also shows that the layers within the North PLD are continuous throughout almost the whole extent of the ice sheet.